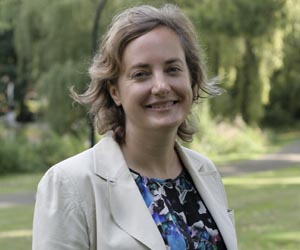 Professor Bryony Hoskins has a chair in Comparative Social Science at the University of Roehampton. She is an internationally renowned expert on political socialisation specialising in political engagement across Europe and the Middle East. Her current funded research projects are on Citizenship Education in the Middle East and North Africa (funded by UNICEF), inequalities and political engagement, political socialisation, volunteering and unpaid work (ESRC LLAKES). She is part of ESRC LLAKES research centre based at IoE/UCL. Professor Hoskins has previously led EU funded research whilst employed at the University of Southampton that explored the effects of the economic crisis on Active Citizenship in the EU. Prior to this and when employed at IoE/UCL she led the ESRC funded comparative research on Inequalities that explored the effects of different country education systems on civic attitudes.

Professor Hoskins has 7 years of policy experience having previously worked at the Council of Europe in France leading on youth research, at the European Commission in Belgium and then in Italy leading the development of indicators on Active Citizenship. She has extensive experience of performing consultancies for the UK cabinet office, European Commission and Council of Europe on topics such as Citizenship, Education and the European Union. Professor Hoskins is currently performing a consultancy for the EU on evaluating the contribution of their programmes to active citizenship in Europe. She has recently completed a consultancy for the UK cabinet office as the external challenger on the balance of competences between the EU and the UK government on Education.

Jinyu Yang: Learning Citizenship and Political Engagement at University in the UK and China. This study is using mixed method research including the analysis of the Citizenship Education Longitudinal data to explore if university has an effect on engagement and establish which methods are effective.

Yuan Liu: Exploring the Relationship between Education, Economy and Individual Civic Attitudes in Europe and Asia. This study is quantitative and uses multilevel modelling to analyse World Values Survey and the IEA International Citizenship and Civic education Study data to identify if education plays a mediating role between the economic situation in a country and civic attitudes.

Professor Hoskins is particularly interested in supervising postgraduate research in the following areas:

- The effect of the economic crisis on Citizenship

If you are student who is interested in undertaking a PhD in these areas please contact her by email.

Tackling inequalities in political socialisation: A Systematic analysis of Access to and Mitigation Effects of Learning Citizenship at School

Citizenship and the economic crisis in Europe: An introduction

Educational trajectories and inequalities of political engagement among adolescents in England

UNICEF The Advisory Group Review Meeting: On the development of a measurement instrument for Life Skills and Citizenship Education (LSCE) in the MENA Region