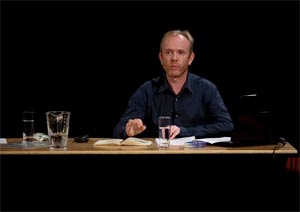 I've been teaching at Roehampton since 1993, where I have been Professor of Theatre and Performance since 2007.

My research interests are largely in contemporary theatre and performance. A central concern of his work has been with structures of theatrical persuasion and spectatorship, both within and beyond the professional theatre, which led to the book The Illuminated Theatre: Studies on the Suffering of Images (Routledge 2014). Formative experiences include performing with the theatre company PUR (directed by Simon Bayly and Lisa Baraitser) in the late 1990s, and encountering the work of Societas Raffaello Sanzio in the early 2000s. With Nicholas Ridout, I collaborated on making a book with the company The Theatre of Societas Raffaello Sanzio (Routledge 2007). I still occasionally make performance, most recently a series of collaborations with Eirini Kartsaki including How to Catch a Dog in a Bucket.

Currently I am working on a project - explored in various recent talks and essays - around theatre's relation to the 'act', and the figure of the 'ridiculous' subject.

In recent years I served a term as Vice-President of Performance Studies international.

I have supervised around 20 PhDs to completion, theoretical and practice-led, and examined over 30 PhDs.

I convene the Major Project module on the MA London's Theatre and Performance: Making, Viewing, Writing.

An example of my undergraduate teaching is the module 'The Theatre Image'. What is the nature of theatrical images? How do images function in the theatre? Is it possible to conceive of a theatre without images, or at least without 'visual' ones? Who are images for? What do they do? How have they been put to use? During the module we study theatrical materials and theoretical texts, along with other examples of visual and performance arts, so as to consider some of the ways in which images are constructed and understood, by theatre-makers and spectators. The module offers students an opportunity to reflect upon the power and danger, the fascinations and disappointments of theatricality as such, and the practices of spectatorship in contemporary culture.

Thinking Through Theatre and Performance

Thinking Through Theatre and Performance

It Happens to Other People

Activity: Participating in or organising an event › Participation in workshop, seminar, course

A Perplexing Pilgrimage: The Spectator as Mitreisender in the Tanztheater of Pina Bausch

Possibilising dance: a space for thinking in choreography